← How to read more, avoid rewriting your novel
How to market a crime novel, by Simon Spurrier → 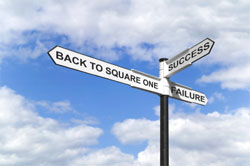 I’ve decided to rewrite The Ooning from scratch. The entire project’s been bothering me since I announced I was going to publish it. Having gone through the pages for a final sub towards the end of last year, it’s obvious it’s not indicative of my current style; “editing” isn’t going to change that. Almost ten years have passed since I first started writing it, and if it’s going to be the first public example of what I can do with long form, it has to be in line with me now. And that means I have the bin the existing draft.

Going back over The Ooning’s story wasn’t the only option. I’ve been thinking about writing something entirely new for about a year. I do have some solid ideas for the next book, but starting from zero would mean a first draft probably wouldn’t emerge until 2013, and it would probably kill The Ooning for good.

I don’t want to just consign it to the “failed” pile. I spent a great deal of time and effort making sure the story worked, and I believe it has legs. While the writing itself is naive and there’s a swathe of superfluity in both the structure and prose, I’m sure I can rewrite it into a much tighter piece. There’s been a good amount of interest in it – certainly enough to make it worthwhile – so to simply can it would be dumb. I’ll start again. It’s not as if I have anything better to do.

I’m actually excited about it. The current draft is comic book in its vision; the idea at the time was to create something fantastical and over-the-top. Since I wrote it, my general creative direction has become more realistic, and I think it’s darkened considerably. As soon as I made the decision to rewrite the entire thing, I started looking back at the characters and imagining how they could be if I stripped away the childishness and “wonder”. Grimness is a hobby of mine, so applying it wholesale should give something interesting.

It’s also given me the opportunity to re-work the structure. I sketched out the bones of it this week, and it’s far leaner than the current draft. A few of the “colour” characters were dropped immediately: I found this liberating. Of course the baker doesn’t make sense. And of course there needs to be a longer introductory period to flesh out the protagonist. I thought I’d be fearful of going back to square one, but it’s clear now it’s a necessary part of my creative process.

As well as trimming away character fat, I’ve taken out some awkward plot devices. There was some stuff I shoehorned in to make everything “work,” but with fresh eyes I can see things that simply aren’t needed. I had tendency to “what if” absolutely everything at the time, but I don’t think the people in the book would ever be as meticulous. I doubt any of them had a plan b.

The current draft’s at about 56,000 words. If I’m diligent I should have a new version at some point in the summer. I’m very busy with work – as ever – but it’s only a short book and I don’t see any reason why it can’t happen quickly. I know the story so well that forming the new chapter structure took less than an hour, and I’m now using my ceiling-in-the-night moments to plan style and instances. It’s coming. And it’ll be better for the wait.